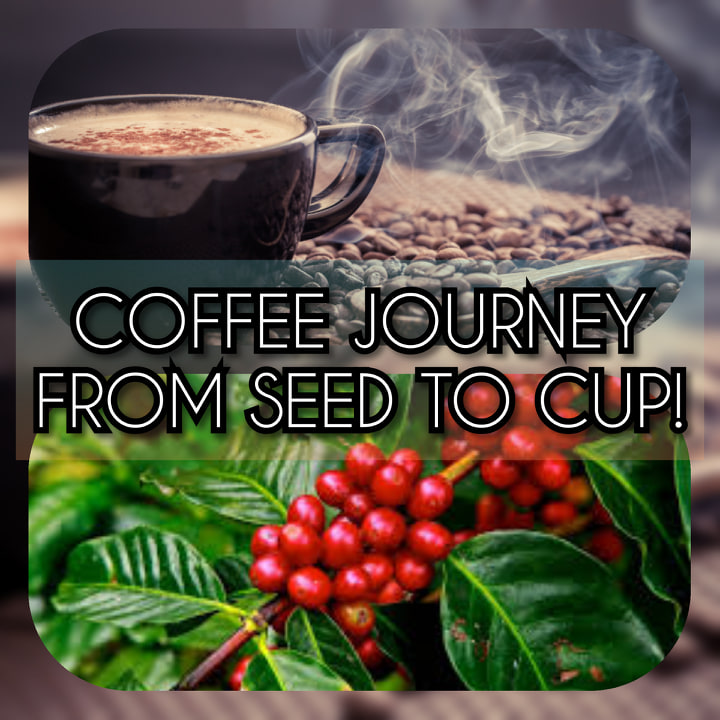 The coffee you enjoy each day has taken a long journey to arrive in your cup!

Between the time they’re planted, picked and purchased, coffee beans go through a typical series of steps to bring out their best.

1. Planting
A coffee bean is actually a seed. When dried, roasted and ground, it’s used to brew coffee. If the seed isn’t processed, it can be planted and grow into a coffee tree.

Coffee seeds are generally planted in large beds in shaded nurseries. The seedlings will be watered frequently and shaded from bright sunlight until they are hearty enough to be permanently planted. Planting often takes place during the wet season, so that the soil remains moist while the roots become firmly established.

2. Harvesting
Depending on the specific variety, it takes approximately 3-4 years for newly planted coffee bushes to bear fruit. The fruit, commonly termed cherries, depending on the degree of ripeness, turn from green to bright or dark red – the unripe ones being green in colour. Cherries ripen faster under lower altitudes and higher temperatures. Coffee can be hand-harvested by people to ensure that only the ripe cherries are picked. Hand-picking is a hard and labour intensive process where people need to carefully check cherries for ripeness and, naturally, it involves paid labour. Cherries mature at different periods and up to three pickings are needed to clear a farm. In countries such as Brazil where land is flat and coffee is grown on large farms, cherries are machine harvested.

3.Cherry processing
After harvesting, cherries are processed as soon as possible to avoid spoilage. Depending on available resources and location, following two methods is used:
– Dry method -t his is the ancient method of processing cherries and is still popular in regions where water is scarce. The fresh cherries are spread out on a large surface and left to dry in the sun for 15 to 20 days.
– Wet method – It’s called ‘wet’ because it uses water to both move the coffee fruit through the process and to extract the beans. This method is a relatively new way of removing the skin from coffee cherries.

4. Coffee milling process
Before being taken to the market, the dried coffee beans are processed as follows:
– Hulling – hulling parchment coffee involves removing the dried husk;

– Polishing – coffee polishing is an optional step that is skipped by some millers. It involves getting rid of any sliver skin that may have found its way through hulling. Polished beans are considered to be of a higher quality than unpolished ones.
– Grading – the beans are then sorted and graded based on size and weight. The polished beans are also checked for color inconsistencies and other flaws with human hands being used to remove any flawed beans. The process is painstaking and can take several hours.

Coffee is repeatedly tested for quality and taste.  This process is referred to as cupping and usually takes place in a room specifically designed to facilitate the process.

Samples from a variety of batches and different beans are tasted daily. Coffees are not only analyzed to determine their characteristics and flaws, but also for the purpose of blending different beans or creating the proper roast. An expert cupper can taste hundreds of samples of coffee a day and still taste the subtle differences between them.

6.Coffee roasting
Unroasted coffee is also known as green coffee and such beans have all the flavors locked in them. Roasting seeks to transform the green coffee into the aromatic brown beans you buy in your favorite stores. Roasting is carried out at temperatures of approximately 550F during which time the green coffee beans are turned continuously to avoid burning. There are different types of roasts – light, medium and dark – and within these roasts each has a few levels. After roasting, the beans are immediately cooled either by air or water. Roasting is generally performed in the importing countries because freshly roasted beans must reach the consumer as quickly as possible.

The objective of a proper grind is to get the most flavor in a cup of coffee. How coarse or fine the coffee is ground depends on the brewing method.

The quality and flavor of your coffee is not only determined by your favorite brewing process, but also by the type of coffee you select!